The Misadventures of an American Tourist in the Lyngen Alps

As I look back at my brief time in Norway from last year, all I can think of is the positive experiences I had. All I know is what I felt there, despite my grit and determination to go it alone ninety five percent of the time. By the way, I asked locals for advice and they were incredibly kind and friendly to give it to me, not expecting anything in return. Just simple conversation. Just building connections and community. At least that is what I felt there.

Now for a bit more of the story I have neglected to finish.

I arrived in Tromsø the evening of May 30th last year. After my five-day, four-night stay on Senja, I drove to the island of Kvaløya to explore the little villages outside of Tromsø like Ersfjorden and Sommarøy. The latter was where I decided to eat lunch at a nearby hotel. I hadn’t booked any sort of kayaking tour from there, but I knew I wanted to spend my time as I liked. Slowly. Peacefully. And Alone.

Rather than taking the ferry from Botnhamn to Kvaløya, I decided to take the long way round directly through the city of Tromsø. I had intended to leave Senja earlier in the morning, but was delayed because I needed to make sure my cabin at Norwegian Wild was spotless and clean. I took my time, not expecting that I would return to Senja for a long time.

You could say that Thor was on my side. I was even welcomed by the gods of thunder on May 24th, when I drove down to Senja in a peculiar light. Even at 10:00 p.m., the sunlight pierced through the storm clouds.

Nearly every day of the week that I spent on the island there were thunderstorms. The sea rose up in an angry protest; the winds were intensely powerful, pulling me up the mountains I was unfamiliar with; and the fog descended into the valleys and harbors. Onto the narrow one-lane road down to Hamn i Senja, I could barely make out the trailhead sign to Suger Mountain.

The Adventures of an American Tourist

The weather cleared the next day, and I decided I wanted to hike to Blåisvannet in the Lyngen Alps. Besides leaving the bustling city of Tromsø in the early morning, I had to drive to Breivikeidet to catch a ferry to Svensby in the Lygen Alps. For some reason, I was lucky to have caught the ferry with little to no wait. That was one of the few times luck was on my side.

It was my first time on a Norwegian ferry, so I was unfamiliar with the process of how to pay. After driving my grey Yaris Hybrid rental car onto the ferry, I waited a little bit before deciding to get out and greet the customer service agent ensuring everyone paid. I timidly quipped something like “I guess I need to pay now, don’t I?” and the young man responded quite directly with “if you don’t, I guess you’ll have to swim.”

It was that direct and dry humor that made me laugh. I only thought that I could be a designated swimmer. But I know that the water must be freezing, even in mid-Spring.

After docking in Svensby, I followed the small line of cars around the island, confounded that I couldn’t find the parking lot to Blåisvannet. At some point, I gave up and pulled over, finally deciding to get out my phone and put the coordinates into Google Maps and follow the directions. That should have been the first step, but you live and you learn.

Once I arrived at the small parking lot, I quickly got ready to hike. I expected the hike to take half a day, so I could enjoy some time in the city in the afternoon.

But not everything goes according to plan. 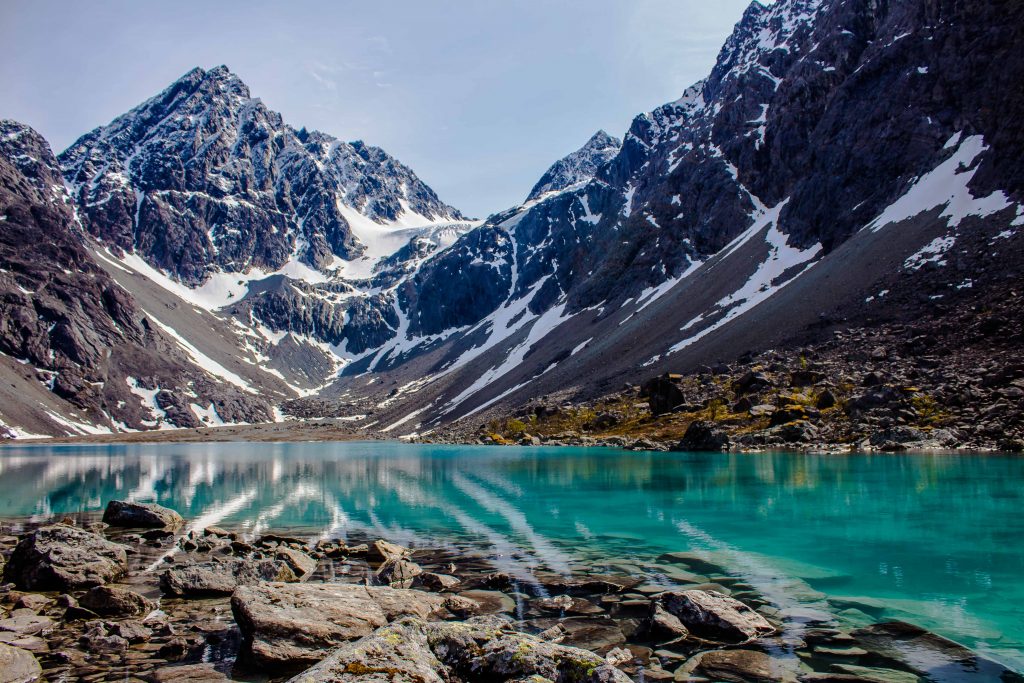 Hiking to Blåisvannet took a couple of hours. The trail is relatively flat: from forested trails to a labryinth of rocks, you can see the lake in the distance. The mountain is relatively distinctive, so I slowly meandered my way up passed  a fast-moving river, likely a result of the heavy winter snows. The sun was out and all I thought about was the similarities of the landscape to my favorite book The Lord of the Rings, quietly observing that these rock formations were like Emyn Muil, but much less cumbersome or foreboding to cross.

Somehow it is here that my misadventures technically started, but after some time, I finally made it to the famous hidden gem, Blåisvannet. Initially I thought I was alone as I was making my way across the boulders, trying to find a good position to take photos of the glacial lake. To the family who happened to reach the lake before me, it was perplexing to see, I am sure. One of their sons were studying at the University of Tromso, so they decided to take a day trip to the lake and enjoy a pleasurable time hiking to the lake, eating lunch, and heading back in time for an afternoon ferry.

Despite knowing that the water would be freezing, I knew that the reason I decided to visit this hidden gem was also to jump into the lake. After some brief small talk with the family, I quickly changed into my swimming suit, and waded into the water before swimming as hard as I could until the freezing water was too much. The water was crystal clear and glacial blue. Nothing stirred, except me.

By the time I reached the rocky shoreline again, the German family who was documenting my swim with my camera returned it, and I began the slow process of warming up. (Good thing it was a warm, sunny day!) We began to chat briefly again, before they decided to make their way back down the trail.

In my small blue backpack I didn’t pack too much, confident I could find my way there and back again. In it I packed some snacks, a sweater, my camera and gear, a swimming suit, and towel. No compass. No map. No GPS.

The Misadventures of the Same Tourist

I thought I had come prepared, but I hadn’t. As I began to meander across the rocks and boulders alone, I passed trail markers, so I wrongly assumed to go straight down. Another small group of hikers came from that way, likely through network of local trails. At least that was my presumption as I timidly made my way through the forested brush.

By midday the weather began to change. The clear blue skies disappeared into a light dreary rain accompanied by storm clouds. And I learned lessons in the Norwegian wild. One of my initial thoughts when heading back down and losing the trail was to follow the river back down to the valley. Indeed, if I had I would arrived at my car a lot quicker. One positive thing to note is that you are likely not far from any fjord and finding a body of water and heading in that direction is one advisable way to remain alert and find your way back.

Instead, I took the longer way through a nearby swamp. (FYI: I suggest you find a local guide willing to take you to this hidden lake from Tromsø). Maybe I was brave, maybe I was stupid. I am not quite sure which was it was that day. I was grateful to have had some outdoor adventure training, so I was able to stay calm under pressure; but I was still unfamiliar with the terrain and trail network in the Lyngen Alps.

By 7:00 pm, I was grateful that I arrived back to the parking lot. I was a bit wet and muddy from falling into the swamp once, but it wasn’t too bad. I needed to catch the ferry back from Svensby. And my AirBnB host in Tromsø was kind enough to let me do a load of laundry at his apartment, a request I had initially declined.

While Silvia Lawrence from Heart My Backpack has already written a list of 17 mistakes you can make when hiking in Norway, I want to share some of the lessons I personally learned on this (mis)adventure.

PS: I hope you have enjoyed this brief, somewhat comical adventure I had last year along with some lessons I learned. I want to be able to have more adventures, whether it’s the original Fjällräven Classic or a self-guided walking tour of Hadrian’s Wall in England from Contours. Carpe diem, right?