Hiking with the Huskies: Norwegian Edition

“In a car you’re always in a compartment, and because you’re used to it you don’t realize that through that car window everything you see is just more TV. You’re a passive observer and it is all moving by you boringly in a frame.”
Robert M. Pirsig, Zen and the Art of Motorcycle Maintenance

For the two weeks I spent in Northern Norway, I rented a car. It was a Toyota Yaris Hybrid. Ironic, isn’t it? The grey Toyota Yaris was my first car, except in America hybrid vehicles are less popular.

Tromsø, the Gateway to the Arctic

Nestled between the Lyngen Alps and the island of Kvaløya, Tromsø is the largest city in Northern Norway with a population of 70,000. It was my second destination point in the far north last summer. Rather than explore just within the city limits I chose to venture out into the countryside.

On my first trip outside of the city, I explored the Lyngen Alps. That was an adventure I won’t forget. You can read about it here.

On June 2nd I planned one tour through the Visit Tromsø website: something relatively affordable and something easy. I arrived at the Radisson Blu Hotel earlier than expected that morning. Like most of my time in Northern Norway, it was relatively cold and dreary. Rain and snowstorms were in the forecast for my last few days, a stark contrast to my sunny welcome in Oslo two weeks prior.

Morning Hike with the Huskies

As I waiting in the hotel lobby, there was a crowd of thirty people or more readying to go on a bus tour. I got pretty restless just waiting, so I meandered my way outside of the lobby sometimes. I also read the fine print on my ticket to the Hiking with the Huskies tour I booked a month earlier and thought that if I were the only person to book the tour, then it might be cancelled.

The beginning of June marks the start of the summer season in Arctic Norway. It’s a brief season that most Norwegians look forward to. The sun shines; the temperatures moderate to a cool 40°F; and snow is less likely to be in the forecast (at least that was my experience in Northern Norway).

Except in the mountains.

At 9:30 that morning, I met the representative from Visit Tromsø and a bus transport arrived soon therafter to take me to the Tromsø Villmarkssenter located on Kvaløya, thirty minutes outside of the city. It was a quiet ride. I wasn’t in a mood to talk that morning, I guess.

When I arrived by 10:00 am, I was greeted by two tour guides, one experienced and one in-training. After picking out a pair of rain boots I was ushered into a room to put on the rain gear. I wasn’t too familiar with which type of husky breed that I would be hiking with, so my guides were able to describe the difference between the Alaskan and Siberian breeds.

After the hour and half hike, I got to spend time with the 300+ Alaskan huskies at the center. This is just one of them. 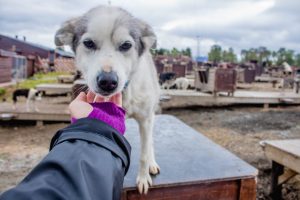 At the Tromso Vilmarkssenter on Kvaløya

As much as I found Senja to be the most charming place in Northern Norway, Kvaløya comes in a close second. Perhaps it’s the country roads and the sense of slow living that made me feel at peace on these islands.

Where do you feel most at peace?

© 2021 The Solivagant Writer — Powered by WordPress