The Canadian Dream: The Historic Charm of Quebec City

From the Canadian Rockies in Alberta to bustling city life in Vancouver, British Columbia or Toronto, Ontario, each province leaves you feeling charmed. Admittedly I have never phsyically visited British Columbia or Alberta, but many of my childhood favorite movies or series have been filmed there. With one exception: Degrassie: The Next Generation, which was filmed in a borough outside of Toronto.

Nowadays I may find some of my childhood favorite movies or series cheesy, but they sparked my initial obsession with our neighbor to the North: Canada. They include Fly Away Home, Far from Home, Air Bud, and Heartland. Technically sci-fi series like Firefly or Battlestar Gallactica (2004) should count too, despite them being set in the future.

Anyway, on the first long weekend of the year, I decided to explore the province of Quebec. It’s the only predominantly French speaking province in Canada. And Quebec City is a charming and historic. Wouldn’t you want to live (or dream of living) in Canada?

Despite being slammed with a severe winter storm, Quebec City is manageable to walk around and explore, especially if you are staying in the city center. Parking may be a bit of a hassle. (To be safe, I decided to park my car overnight at one of the nearby garages. That way I know I could get out on the Monday morning.) No matter where I go, I consider safety first. 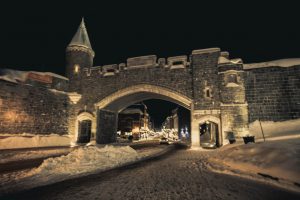 Quebec City is a pretty walkable city; something I was grateful for since I stayed just a few minutes walk to the Old fortified city. On Rue St. Jean, I passed by a charming hotel – I think – with both British and Irish flags overhanging from above. 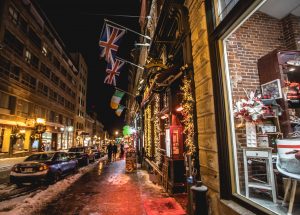 Are any of you as fascinated by European landscapes and architecture? Considering I currently live in the United States, it’s challenging to find locations that fit into my idea of storytelling. I think it’s because, as a student of history, I grew fascinated more by the Old World than the New. (But that’s a different, albeit boring, story!) The countries, although some technically young in age, have histories that go back centuries.

Fortification Walls around the Old City in Quebec

From Rue St. Jean, you pass a small park square where, if you’re in luck or you want to take a spin, you can choose to go ice skating. At the Parc d’Youville, ice skating can be a great way to blend in with the locals. On my second night when there was less of a crowd, I spent fifteen to thirty minutes simply enjoying the experience. (Sorry guys, I didn’t take pictures while I was skating. A) I’m not that good at the sport. And B) I gotta live in the moment!)